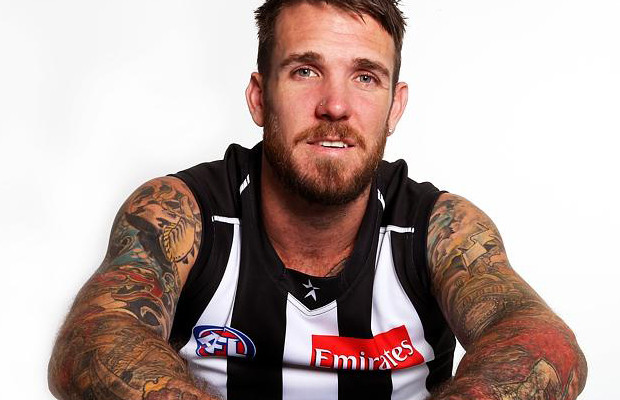 Dane Swan was recruited by the Collingwood Football Club with pick 58 in the 2001 AFL draft. He made his debut in June 2003 at the age of 19, though he only played three games (against the Western Bulldogs, Richmond and Essendon).[1] Swan managed just 30 games in his first four seasons in the system at Collingwood, and although he played some solid football in that time, he was not regarded as outstanding. He played much of this time with Williamstown, which was then Collingwood’s VFL-affiliate, and he was a member of its 2003 premiership team.

In 2006, he broke through, playing 21 games and finished sixth in the Copeland Trophy voting. Dane Swan mainly rotated through the midfield and moved forward when required. His first nine weeks were productive, averaging nearly 26 disposals and kicked 15 goals, before a hamstring injury suffered against Brisbane Lions in round ten sidelined him until round thirteen.

2007 was considered his breakout season as he placed fourth in the Copeland Trophy and was a surprise packet at the Brownlow, leading for most of the night before finishing sixth with 20 votes.

The 2008 Copeland Trophy winner had a strong year averaging twenty-five disposals, seven marks, three tackles and one goal a game. Swan led the team in total disposals (590) and kicks (368), second in marks (163), and third in handballs (222) and tackles (75). He had 14 games of 25 possessions or more and kicked two or more goals on six occasions. Round 10 against West Coast was one of Swan’s best collecting 34 possessions, 10 marks and two goals. In round 14 against Sydney, he had 30 touches and 13 marks.

In the 2009 season, Dane Swan averaged 31.8 disposals, 7.8 marks, 3.0 tackles and 5.4 inside-50s per game. He was one of the AFL’s most prolific ball winners, along with being an in-and-under specialist winning the contested ball at most stoppages whilst also running hard.

In Collingwood’s 2009 round 10 clash against Port Adelaide, Swan obtained 48 possessions, 22 kicks and 26 handballs. This was the best disposal count in a decade and was then the third highest recorded disposals count in one match, behind Greg Williams’ 53 and Tony Shaw’s 50. It was a record since the length of game quarters was shortened from 25 minutes to 20 minutes in 1994, until surpassed in round 22, 2011 by Adelaide’s Scott Thompson (51 disposals).

Dane Swan was selected in the 2009 All-Australian team, but controversially as a half forward flanker, rather than as a midfielder, which is his usual position.

Dane Swan averaged 31.8 disposals, including 19 kicks per game. On 6 September, Swan won the AFL Players Association MVP Award (Leigh Matthews Trophy) after a vote by the players. That year he was also elected as the ruck-rover for the All-Australian team. His consistent season was a cornerstone to Collingwood’s fifteenth Premiership, to the point of having his tattoos referenced on the Herald Sun premiership poster. Swan finished third in the Brownlow Medal count, having started favourite. On 31 October in the International Rules Series he won the Jim Stynes Medal. At the conclusion of the season, Swan became only the fourth ever Collingwood player to win three consecutive Copeland Trophies.

With Swan’s contract at Collingwood due to expire at the end of 2011, there was much pre-season media speculation over a possible move to new AFL club Greater Western Sydney. This was put to rest during the lead-up week to the season’s commencement when Collingwood announced that Swan had signed a new three-year deal, committing him to the club until the end of 2014. Swan started 2011 in the same good form as 2010. He attained 40 disposals in round 2 against North Melbourne but sustained a quad injury close to the midway point of the season and his form deteriorated. Collingwood decided to send Swan, with team mates Brent Macaffer, Darren Jolly and Nathan Brown, to a high altitude training camp in Arizona in an attempt to help the players recover faster from their individual injuries. The trip proved effective for Swan, with an immediate effect on his playing performances. In the next six games after his return, he had an average of 35.3 disposals per game with a strong effort against Essendon with 45 possessions and a goal. He later won the 2011 Brownlow Medal with 34 votes – setting a new record for the most votes polled in a count under the 3-2-1 system, which was later surpassed by Patrick Dangerfield in 2016.

Dane Swan received some criticism early on in the 2012 season and was accused of being unfit and “too fat”. In the annual Anzac Day clash, Swan won his first Anzac Day medal as best on ground after a one-point win over Essendon, with forty-two possessions, three goals and six tackles during the game. Swan missed two games midway through the season due to a hamstring injury, then returned for the Queen’s Birthday clash in Round 11 against Melbourne, where he finished with a game high 42 possessions. Strong performances over the following two months saw Swan rise in the Brownlow Medal betting, to become one of the favourites behind Jobe Watson, Scott Thompson and Gary Ablett. Swan was later found to have broken a pledge made by the playing group to abstain from drinking alcohol for the remainder of the season. He was suspended for two games as a result. Swan had over 40 disposals in six different games, reaching a new career high of 49 against Hawthorn in the round 17 loss, he also didn’t have below 25 disposals. Swan over the home and away season averaged 35.7 disposals (career high and AFL record since stats were recorded) and 1.2 goals a game. Despite missing four home and away games Swan still finished fourth in the Brownlow Medal count and averaged more votes per game than anyone else in the top ten. He named on the bench in the All-Australian team, his fourth selection in his career.

Dane Swan started the season averaging 30 possessions in the first three matches. In round 4, Swan played his 200th AFL game against an unbeaten Richmond, producing an almost best on ground performance (thirty-five disposals, six marks and one goal) and was only bettered by teammate Travis Cloke, who kicked a career best seven goals. At the end of the year Swan averaged 31.2 disposals, 5.7 marks, 3.4 tackles, and 5.2 inside 50s per game. He finished first in overall disposals, and equal seventh in total inside-50s. Swan was selected as the ruck-rover in the 2013 All-Australian team, the fifth consecutive year he was included. Swan finished third in the Brownlow Medal with 26 votes, losing by two to the winner Gary Ablett, and one to second placed Joel Selwood.

After wrist surgery in the off season, Swan started the season slowly, with an average of 22 disposals in the first three rounds, including just sixteen disposals in round 2. It didn’t take long for him to find his form though, including thirty-five disposals and eleven marks against North Melbourne, and twenty-six disposals and four goals against Essendon to earn him his second ANZAC medal.

After 2014, a year that Dane Swan described as putrid, Swan returned to career best form in 2015, averaging twenty-nine disposals and one goal per game, as well as reaching the 250 game milestone. Swan notched 30 disposals in 11 games during 2015, and played every game in 2015 apart from Collingwood’s round 23 clash against Essendon due to a knee injury he sustained the week before. Although Collingwood missed the finals, Swan arguably proved to critics that at the age of 31 he is still able to play high quality football at an elite level.

In the round one clash against Sydney, Dane Swan was badly injured after landing awkwardly on his foot, breaking three bones, including a Lisfranc. The injury ruled him out of the rest of the season, and in August he announced his immediate retirement from the AFL.