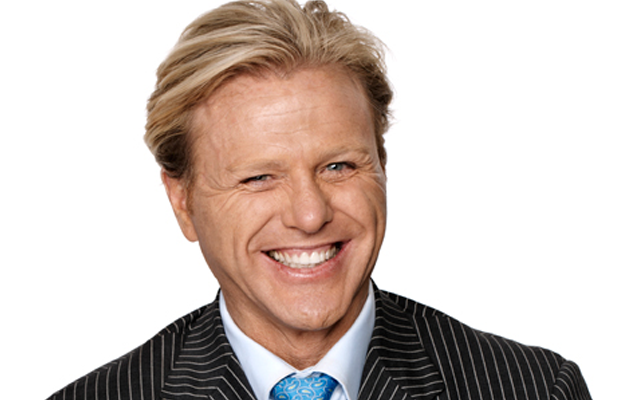 Dermott Brereton featured on the cover of the “Inside the Battle of ’89” DVD in memorable moment pose after recovering from a solid Mark Yeatesshirtfront. Dermott, nicknamed The Kid, played most of his career (189 games and 427 goals) in the centre half forward position at the Hawthorn Football Club, where he formed part of a potent forward line that included champion players such as Jason Dunstall.

Dermott Brereton debuted as a young man with red hair which he later dyed blonde. His debut was against North Melbourne in the 1982 finals series – he kicked five goals and assisted in a few more.

Dermott Brereton was known for his bustling style and strong marking abilities and off the ball scuffles.

Dermott Brereton won Hawthorn’s Best and Fairest award in 1985 and was the team’s leading goalkicker in the same year. He achieved All-Australian status in 1985.

Having bulked up over his career, Brereton became a football punisher and was known for his aggressive hip and shoulder bumps on running players. His targeting of other players by this method led to the charging rule being instigated to protect players whose intention was to focus on the ball.

A famous incident in 1988 involved Hawthorn’s rival Essendon at Waverley Park. Dermott Brereton ran through the three quarter time huddle much to the surprise of the Bomber players causing a scuffle to break out. This incident was in retaliation to a free kick paid against Brereton for kissing Essendon’sBilly Duckworth while Jason Dunstall lined up for goal. Dunstall kicked the goal but due to Brereton’s indiscretion, the goal was disallowed. Brereton, fuming, ran through Essendon’s huddle to prove a point. Post match, Essendon’s coach, Kevin Sheedy shrugged off the event as insignificant, quipping, “Just another mad Irishman!”

Perhaps the most memorable moment of his career was the 1989 VFL Grand Final that was featured in a Toyota Memorable Moments television commercial. In one of the toughest grand finals in the league’s history, Brereton was lined up at the centre bounce by Geelong Football Club’s Mark Yeates and hit with a solid shirtfront. Severely winded and concussed, he was attended to by trainers. He began to vomit before jogging back into the play. Only minutes later in the game, he marked and kicked an inspirational goal. He would finish with three goals in a game that Hawthorn would win by six points. He was later diagnosed with broken ribs.

During his career at Hawthorn, Brereton was selected to play representative State of Origin football for Victoria nine times and kicked a total of 18 goals.

Brereton’s physical style of play came at a cost. By the end of 1992, he was suffering from crippling chronic hip pain and struggled to make a regular appearance. At the advice of his club, he retired that year.

During 1993, Dermott Brereton began to recover from the injuries that plagued his career at Hawthorn and expressed his intention to make a return to the game. The struggling Sydney Swans, in need of a big-name player capable of helping to turn around the team’s performance, as well as draw crowds to their home games at the SCG, drafted him for the 1994 season. Moving to New South Wales, he played only seven games as frequent suspensions for rough and/or violent play prevented him from regaining peak form. His fame in Victoria was not equalled in New South Wales and he also failed to have any on-field impact on the Swans’ fortunes.Sydney Swans (1994)

Brereton’s most notable act as a Swan was infamously stomping on Hawthorn player Rayden Tallis’ head while Tallis was on the ground in a pre-season game, earning him a seven-match suspension. He would receive another seven-week suspension in that same year when Richmond’s Tony Free had his jaw broken with an alleged ‘karate chop’ by Brereton. His only other moment of note was being flattened by West Coast Eagles’ captainJohn Worsfold. The Swans delisted Brereton at the end of the 1994 season.

Still wanting to perform at the highest level, Dermott Brereton worked on his fitness over the 1994–95 off-season and once again made himself available for the national draft.

While clubs are generally loathe to recruit players above the age of 30, Collingwood nonetheless took a gamble on him. The Magpies experiment was slightly more successful than his stint at Sydney and in 15 games he kicked a total of 30 goals, ending his career at the end of 1995.

After a lack of success in his returns from retirement, Brereton announced his intention to retire from elite football in 1995. In 1996 he returned to Frankston Rovers (now Frankston Bombers), where he had his cheekbone broken by a Dromana player in the second round of the season. He played a handful of games before going into retirement proper at the conclusion of the season.

Dermott Brereton was inducted into the Hawthorn Team of the Century, as well as the Australian Football Hall of Fame. He is also a member of the Mornington Peninsula Nepean Football League Hall of Fame.

His desire to continue playing football actively has seen him participate in the AFL Legends Match on several occasions. Each time his lack of fitness is the focus of much mirth by the commentary team.

On 8 December 1997, he was appointed as a director of the Hawthorn Football Club and served in the role for just over eight years before retiring on 29 March 2006. One of the most notable incidents during his term as director was his alleged involvement in the run-up to a bench-clearing brawl between Hawthorn and Essendon in a 2004 encounter that became known as the Line in the Sand Match. During halftime, just before the brawl, Brereton had reportedly told Hawthorn players to “draw a line in the sand” and take a physical stand against Essendon; he denied making that particular remark, but admitted to telling senior players “to stand up to any Essendon aggression”.

From quite early in his playing career, Dermott Brereton pursued media appearances in anticipation of joining the media full-time when he retired. During the 1980s, he had a six-year stint on a morning show hosted by veteran television performer, Ernie Sigley, who mentored the ambitious Brereton. In the early 1990s, he joined Channel Nine when the network began showing interest in Australian football for the first time in more than twenty years. He was one of the original panellists when the long-running The AFL Footy Show began in 1994 and also wrote in The Age. In 2000, he moved to the Seven Network to provide match commentary on AFL matches and hosted the show The Game, he stayed at Seven until they relinquished the rights at the end of 2001. In 2002, he returned to the Nine Network to provide match commentary on AFL matches when the network commenced its AFL coverage. He continued to be a regular panellist for The AFL Footy Show.

In 2004, Dermott Brereton hosted The Run Home radio show on Melbourne AM radio station SEN 1116 with Anthony Hudson and Matthew Hardy, but left due to a payment dispute. In previous years he has also co-hosted the breakfast show on Melbourne FM station Gold 104.3 with Greg Evans, and been a commentator on another FM station, Triple M.

In 2006, he made an appearance on Torvill and Dean’s Dancing on Ice. Dermott Brereton left the show early after injuring his biceps. In 2006 Brereton was sacked from Triple M due to low ratings. In 2007, Brereton rejoined 1116 SEN to broadcast football, the same station he left two years earlier. He also presented on the Channel Nine holiday show Getaway.

In 2011, Dermott Brereton ended his twenty-year association with the Nine Network and announced he would be joining Foxtel for the 2012 season. From 2012 onwards, he provided match commentary for Foxtel and hosted the Fox League Teams show on Thursday nights on Foxtel’s new 24-hour AFL channelFox Footy, which launched on 17 February 2012.