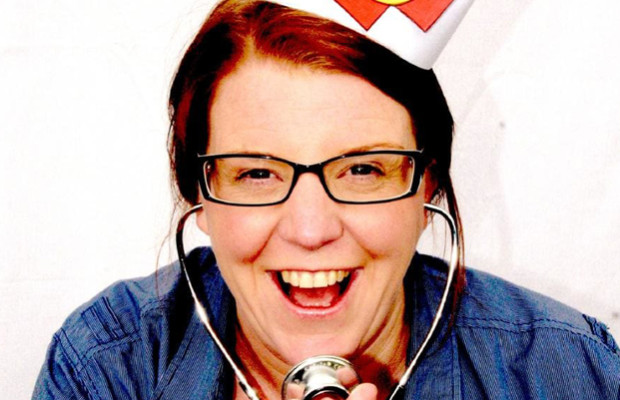 Born and raised in Manchester, England; now a proud Australian. Georgie Carroll is a Comedian, Nurse, Wife and mother.

This combination of Nationalities, home life and hospital has provided a 24/7 training ground that has nurtured Georgie’s naturally funny bones. Her bluntness and charm coupled with a razor-sharp wit, give her a broad-spectrum appeal that can be put into any room, with any line-up, and shine.

Georgie Carroll took out ‘Most prolific writer’, ‘People’s Choice’ and ‘Comedian of the Year’ in the Adelaide Comedy Awards. Her debut festival hour ‘Nurse Case Scenario’, was nominated for ‘Best Emerging Comedy’ at Adelaide Fringe and ‘Best Comedy’ at Perth Fringe World. Her followup show ‘Gauze and Affect’ is undoubtedly Georgie’s strongest hour to date. Collectively the shows have sold out Internationally, with ‘Gauze and Affect’ breaking record attendance numbers for her venue at Gluttony (Adelaide Fringe 2017)

Georgie has been blowing the roof off the Australian Comedy club circuit since 2012, fine tuning her talent to become the world class comic, MC and writer she now is.

Georgie Carroll has now embarked on a TV career, starting at the very top as a regular panellist on Channel 10s ”Have You Been Paying Attention?”

With 18 years of Emergency and Intensive Care Nursing under her belt, Georgie continues to Nurse when not on tour. This, along with her exceptional comedic talent has cemented her as the go-to entertainment for Medical and Nursing Corporates, Conventions and Awards Ceremonies.

*Disclaimer* Georgie Carroll did not write this. She is bloody good but you don’t want to brag about yourself too much.