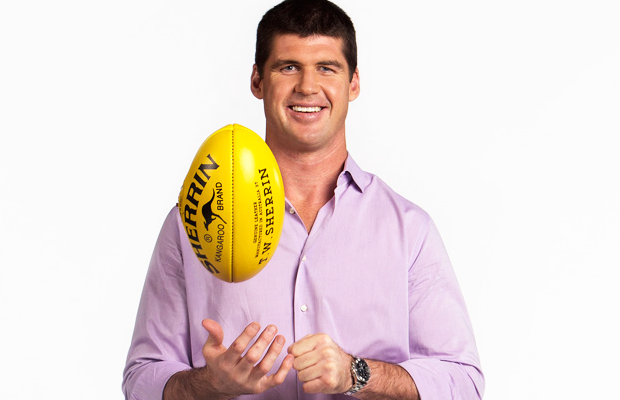 Jonathan Brown was selected by the Brisbane Lions in the 1999 AFL Draft under the Father-Son Rule and subsequently made the move to Brisbane and was immediately groomed as the club’s centre half-forward. The next year he played his first senior game for the Lions as an 18-year-old, against theAdelaide Crows, in Round 5 of 2000. His best game in his opening year came against Fremantle in the final round of the season when he had 23 disposals and scored two goals.

Touted as the next Wayne Carey early in his career, Jonathan Brown was an unspectacular but consistent contributor during his first few seasons and, at 195 cm and 105 kg, was an imposing target across half-forward. In Round 6 of 2001, Brown kicked 7 goals to go with 9 marks and 19 disposals in his first dominant performance in front of goals. For the season he averaged 6 marks, 14 disposals and 1.5 goals per game. His season tally of 157 marks was a team high and his 38 goals was third best of Brisbane players.

Plagued by injury and regular meetings with the AFL Tribunal during the next three seasons, Brown’s development was hampered until 2004, when he had his best season to date, averaging an impressive 8 marks, 16 disposals and 2.3 goals per game. Despite missing 8 games through injury and suspension, Brown kicked a career high 39 goals and again led the Lions in marks, with 140. His progress was punctuated in the Qualifying Final againstSt Kilda when he turned on a best afield 6 goal performance. The season ended very unfortunately for Brown as he was reported for striking Port Adelaide’s Josh Carr during the Lions 40-point Grand Final loss. The report saw Brown suspended for the first five games of the 2005 season.

In 2005, Jonathan Brown was promoted to the Lions’ leadership group. He made his return from suspension in Round 6 of 2005 against Essendon and immediately had a big impact, taking 14 marks and kicking 8 goals on then-Essendon defender and future Sydney Swans premiership player Ted Richards, in what was the best game of his career and an ominous sign for the rest of the competition., The following week, Brown kicked another five goals, and in round 10 against the Kangaroos Brown had 12 marks, 27 disposals and 5 goals, followed by a career high 29 disposals in round 11. Injury again cut his season short, but, 2005 was clearly Brown’s best individual season as he averaged 8 marks, 18 disposals and 2.8 goals per game during the 12 games he played prior to round 17, before a severe bout of osteitis pubis prevented him from having any influence in his last two games.

2006 was the year that Jonathan Brown first stamped his authority on the AFL competition. Mid-way through the season, Brown seemed certain to claim almost every individual award on offer at the end of the year, as he dominated in the air and in front of goals on a weekly basis. Brown’s form hit a peak between rounds 7 and 10, when over four games he averaged 11 marks, 20 disposals and 6.5 goals per game, including performances of seven or more goals in three successive games. Tragically injury yet again proved the spoiler as round 10 ended up being Brown’s last of the season. In the 2006 Brownlow Medal count, Brown polled 13 votes, enough to secure a top 10 finish despite only playing 10 games out of a possible 22. He was leading the count easily before he became injured.

Following the retirement of longtime captain Michael Voss in 2006, Jonathan Brown was strongly favoured to replace Voss as captain. Nevertheless, when the captaincy was announced on 20 March 2007, Brown was named as co-captain alongside Simon Black, Chris Johnson, Nigel Lappin, and Luke Power. Brown had previously acted as co-captain for the Lions in the 2007 NAB Cup Grand Final, alongside Black, Johnson, and Power, with Lappin out injured. Desperate for an injury free season, 2007 delivered just that for Brown, and what resulted was the uninhibited Brown that fans had been waiting to see for six long years. Brown had his best ever year, averaging 9 marks and 16 disposals, and kicked 77 goals at 3.5 per game in 2007. In round 16 againstCarlton, he became the first Brisbane player to kick 10 goals in a game, and he finished the year with 7 goals against Geelong to secure the Coleman Medal as the season’s leading goal kicker. That year Brown took the most contested marks in the competition to go with his first Coleman Medal. He also won his first club best and fairest award, the AFLPA Best Captain Award, the Robert Rose Award for Most Courageous Player, was runner up in theLeigh Matthews Trophy as League MVP and was named vice captain of the All Australian team. At season’s end Brown was regarded by many, including AFL guru Mike Sheahan as the number one player in the competition.

Jonathan Brown started the 2008 season slowly by his lofty standards, and was rested for one game in round seven due to some minor injury concerns. He then returned to his best with three consecutive six goal performances and combined with Daniel Bradshaw to be one of the most formidable forward duos in the league in the second half of the season. In the 15 games after his week off, Brown averaged 9 marks, 16 disposals and 3.7 goals per game, although his season stats were down on the previous year. Brown captained Victoria in the AFL Hall of Fame Tribute Match against the Dream Team, and a mark taken over Matthew Richardson in that game is captured in Jamie Cooper’s painting the Game That Made Australia, commissioned by the AFL in 2008 to celebrate the 150th anniversary of the sport. He was named the AFLPA Most courageous player at the end of the 2008 season by his fellow peers, for the second year in a row, however he missed out on a second All-Australian selection. Brown’s 2008 season was capped off by winning his second club best & fairest award in a row.

At the completion of round 22 of the 2008 season, Jonathan Brown announced he had signed a 4-year contract that would see him remain a Lion until he is at least 31. On 27 October 2008, Lions coach Michael Voss announced Brown’s appointment as sole-captain of the club.

Named as sole captain of the Lions prior to the season, 2009 was Brown’s most consistent year to date, being kept goaless just once and kicking two or more goals in a club record 17 consecutive games. In round 6, Jonathan Brown had 13 marks, 24 disposals and five goals against Essendon, and in round 17, he kicked 8 goals against North Melbourne, including his 400th career goal, he also had 21 disposals and 12 marks. He placed second in the Coleman Medal at season’s end, 8 goals behind winner Brendan Fevola, and took the most contested marks in the league. He finished the year with a career high, and Brisbane Lions record, 85 goals and averaged 8.5 marks and 16 disposals per game. His 19 Brownlow Medal votes placed him fourth overall and he concluded the year with his third consecutive best and fairest medal, second All Australian selection and the AFLPA Best Captain Award.

Jonathan Brown was hampered by injury throughout the 2010 season, causing him to miss six games for the Lions. After a promising start to 2010, Brown and other key players for Brisbane were struck by injury and the team finished the season in 13th position on the ladder. Despite missing six games and the controversial introduction of Coleman Medallist Brendan Fevolato the team, Brown was again the Lions leading goalkicker, with 53 for the season, and he came third in Brisbane’s Best and Fairest, behind Michael Rischitelli and Simon Black. Brown was named the Members’ Player of the Year and polled almost half of his Best an Fairest votes in the first four rounds, showing that if he had not been struck down by injury he would have been likely to win his fourth Merrett–Murray Medal.

Jonathan Brown suffered a horrific facial injury in the first game of the 2011 season against Fremantle after he was kneed in the head by defender Luke Mcpharlin in a marking attempt.

Jonathan Brown suffered a second horrific facial injury in round 17 of the 2011 season.

Jonathan Brown suffered a third facial injury in a 2012 intra club match after teammate Matt Maguire kneed him in the head in a marking contest. Doubts stated to surface over his career after these consistent breaks to his skull.

Jonathan Brown was the victim of another facial injury in the Round 13, 2014 clash between the Lions and the Greater Western Sydney Giants. He collided with Tomas Bugg’s knee and was taken off the ground. He suffered a concussion, which caused his retirement from football.