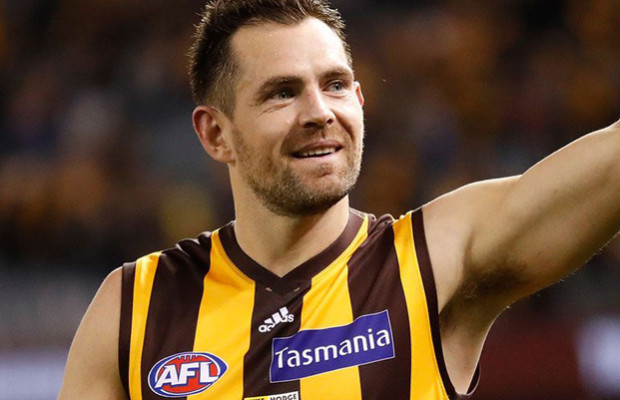 Luke Hodge plays half-back flanker and midfield. Recruited from the Geelong Falcons Under 18 team, Hodge made his debut in 2002.

Hodge was recruited from the Geelong Falcons Under-18 Football Club, and in 2001 nominated for the 2001 AFL Draft. He was the number-one draft choice of Hawthorn Football Club (taken from Fremantle for Trent Croad and Luke McPharlin). In the early years of his career he was compared with Chris Judd who was chosen with the third selection in the same draft.

Luke Hodge was named in the 2005 All-Australian team and in International Rules team for Australia. Hodge was named sole vice-captain of the Hawthorn Football Club in October 2007.

He was named in the 2008 All-Australian team and in International Rules team for Australia. Hodge won the Norm Smith Medal for being the best player on the ground during the 2008 AFL Grand Final.

Luke Hodge became the captain of the club after Sam Mitchellhanded over the captaincy prior to the 2010 Peter Crimmins Medal count.

Hodge played only eight home and away games in 2012 due to an Posterior cruciate ligament injury. Returning after a brief illness that kept him out of the preliminary final, he led his side in the 2012 AFL Grand Final but didn’t have a major influence on the result.

More post-season surgery followed and he missed the first game of the 2013 season, but he played the majority of the season finishing fifth in the club’s Peter Crimmins Medal award. Luke Hodge played in the 2013 AFL Grand Final against Fremantle Dockers and was listed as one of his teams best players on the day. Hawthorn’s victory allowed him to claim his second Premiership and his first Premiership as a captain.

Luke Hodge had another consistent year in 2014. He played his 250th career game in the Grand Final, with the Hawks defeating the Sydney Swans to win their 12th premiership. In the game, Hodge became only the third player (after Gary Ayres and Andrew McLeod) to win two Norm Smith Medals, and captained the side to his third premiership, his second as captain.

Luke Hodge was suspended for two weeks in round 21, 2015 by the Match Review Panel (MRP) for an incident in which made contact with Chad Wingard in close proximity to the behind post.

Hodge’s history of strong performances in finals, in particular during Hawthorn’s run of three consecutive premierships in 2013, 2014 and 2015 has led to members of the media, including commentator Bruce McAvaney, to dub him “Mister September”, after the month in which AFL finals traditionally take place.

Hodge announced in July 2017 that he would retire at the end of the season. In Hodge’s last game for Hawthorn, he had 14 disposals in a 9-point win over the Western Bulldogs.

In October 2017 Hawthorn confirmed media speculation that Luke Hodge would seek a move to Brisbane Lions in the forthcoming trade period. He was officially traded Brisbane during the trade period.