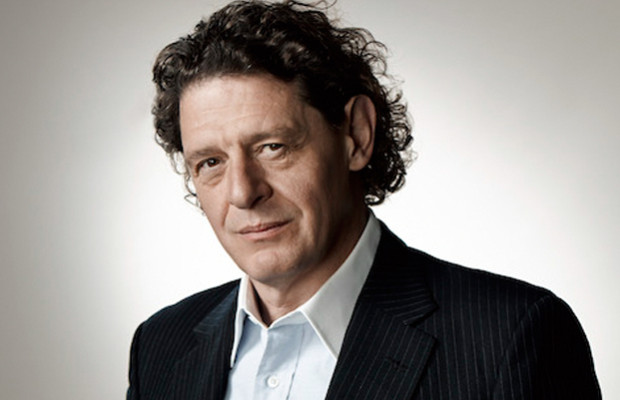 Marco Pierre White was the third of four boys born to English chef Frank White and Maria-Rosa Gallina, an Italianemigrant. White left Allerton High School in Leeds without any qualifications and decided to train as a chef, initially at Hotel St. George in Harrogate and then at the Box Tree in Ilkley. Aged 16, he went to London with “£7.36, a box of books and a bag of clothes”, and began his classical training as a commis with Albert and Michel Roux at Le Gavroche.

Marco Pierre White continued his training under Pierre Koffman at La Tante Claire, moving to work in the kitchen of Raymond Blanc at Le Manoir, and later with Nico Ladenis of Chez Nico at Ninety Park Lane. He then branched out on his own, working in the kitchen at the Six Bells public house in the Kings Road with assistant Mario Batali.

In 1987, Marco Pierre White opened Harvey’s in Wandsworth Common, London, where he won his first Michelin staralmost immediately and was awarded his second in 1988. He later became chef-patron of The Restaurant Marco Pierre White in the dining room at the former Hyde Park Hotel, where he won the third Michelin star, and then moved to the Oak Room at the Le Méridien Piccadilly Hotel.

By the age of 33, White had become the first British chef to be awarded three Michelin stars. He was also the youngest chef to win three stars.

Although Marco Pierre White worked for 17 years to pursue his ambition, he ultimately found that, in spite of his accomplishments, recognition and fame, his career did not provide him with adequate returns in his personal life. So, in 1999 he retired and returned his Michelin stars.

“I was being judged by people who had less knowledge than me, so what was it truly worth? I gave Michelin inspectors too much respect, and I belittled myself. I had three options: I could be a prisoner of my world and continue to work six days a week, I could live a lie and charge high prices and not be behind the stove or I could give my stars back, spend time with my children and re-invent myself.”

During his early career in the kitchen, White regularly ejected patrons from his restaurants if he took offence at their comments.

When a customer asked if he could have a side order of chips with his lunch, Marco Pierre White hand-cut and personally cooked the chips, but charged the customer £25 for his time. A young chef at Harveys, who once complained of heat in the kitchen, had the back of his chef’s jacket and trousers cut open by White wielding a sharp paring knife.

Marco Pierre White is seen in UK adverts for Knorr stock cubes and stock pots, a Unilever brand. In answer to criticisms that he’d “sold himself out as a chef” by acting as a brand ambassador for such products he said, “by working with companies like Knorr it allows me to stand onto a bigger stage and enrich people’s lives… Michelin stars, they’re my past.”