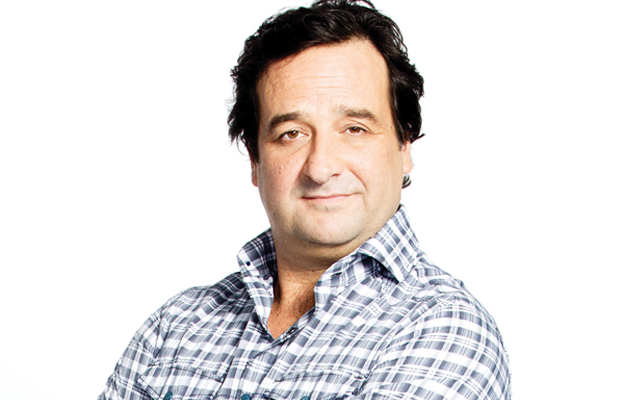 Mick Molloy worked with the D-Generation as a writer-performer on their 1988 Seven Network specials (he had auditioned for the D-Gen in 1986, but it wasn’t until the troupe saw him in the 1987 Melbourne University revue, Laminex on the Rocks, that they signed him up). He also worked as a writer on the ABC’s The Gerry Connolly Show(1988), the Network Ten series, The Comedy Company, in its 1989 season, and, while working on the (unscreened) pilots for The Late Show for the Nine Network(1990), Molloy was a cast member of ABC TV’s The Late Show (1992–1993) as a writer/performer. As well as pairing up with Tony Martin for each episode’s introduction and the Street Interviews segment, Mick co-hosted the segments Muckrakers with Jason Stephens and Commercial Crimestoppers with Santo Cilauro, played the thick-witted assistant of stuntman Rob Sitch in Shitscared, and performed in countless sketches (he provided the voices of Sergeant Olden in The Olden Days and Chief Chromedome in Bargearse). Molloy also delivered a series of volatile rants in the Mick’s Serve part of Late Show News.

In 2007, Mick Molloy filmed a pilot of The Nation, a weekly late-night news-based comedy hour on the Nine Network. The show debuted on 5 June, but struggled for ratings, attracting only 575,000 viewers nationally for its fourth show. Originally it was on Tuesdays at 9:30 pm, but was moved to Wednesdays at 10:30 pm and has been off air since the end of August 2007.

In 2008 it was announced that Mick Molloy would replace Peter Helliar on the panel of Channel 10’s Before the Game, an AFL themed show, after Helliar had discontinued his position post-2007. On the show, his views as a keen supporter of the Richmond Football Club (Tigers) were often made clear. Molloy is one of the club’s more prominent supporters and as well as appearing on the Before the Game, he has in the past appeared in a club membership advertising campaigns. In June 2008, Molloy made comments on the show regarding Nicole Cornes, the wife of former Adelaide coach Graham Cornes, in which he suggested she had slept with footballer Stuart Dew. Nicole Cornes sued the Ten Network for defamation, and was awarded A$85,000 in July 2011. Molloy remained with Before the Game until it was axed at the end of the 2013 AFL season.

In 2009, Mick Molloy starred in the sitcom The Jesters which aired on Movie Extra on Foxtel. He played a veteran comic Dave Davies who has become the manager of a group of young, rookie comedians and who has to cope with the behind-the-scenes antics of producing a comedy sketch show. A second series aired in 2011.

In February 2014, it was announced by the Seven Network that Mick Molloy would be joining its one hour AFL match preview show on Saturday nights during the football season.

After writing and performing on The D-Generation Breakfast Show on the Triple M radio, from 1990 to 1992, Mick Molloy teamed up with Tony Martin for Triple M’s Bulltwang(1990)

In 2011, Mick Molloy returned to radio and to Melbourne’s Triple M, as a permanent member of The Hot Breakfast. He is also appearing daily at 6:50am on Triple M Brisbane’s The Grill Team.

Following the cancellation of The Mick Molloy Show, Mick Molloy returned with a video release, entitled Shonky Golf with Mick Molloy, and he directed the feature-length documentary Tackle Happy (2000). He played Kim’s dad Gary Poole on Kath & Kim (2003–04) and co-starred, with David Wenham, in two Murray Whelan telemovies,Stiff and The Brush-Off (both 2004).

Mick Molloy has starred in three movies, Crackerjack (2002) (which he also co-wrote, receiving an AFI nomination), Tony Martin’s Bad Eggs (2003), and BoyTown (2006), which, like Crackerjack, he co-wrote with his brother Richard Molloy. During production of the DVD-release for Boytown in 2007, Molloy and his long-time collaborator Tony Martin had a dispute over the proposed extra content for the DVD and the two have not worked together since. In the 2006 Australian feature film Macbeth, Molloy played Brown; it was the second time he has appeared in a production of Macbeth.

You can currently catch Mick Molloy on TEN’s popular program, Have You Been Paying Attention?