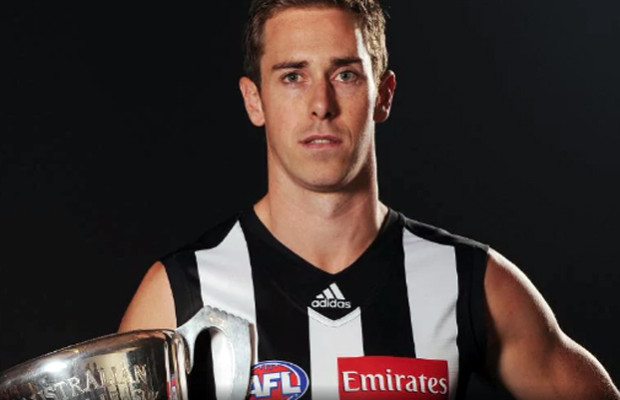 Nick Maxwell was spotted by AFL club Collingwood who selected him as a rookie player in 2002.

In his first year at the club he played most of his games with VFL affiliate Williamstown Seagulls. Late the following year, he played in an off-season exhibition match in London against Fremantle, in which he performed impressively. Collingwood retained Maxwell on their rookie list. When Tom Davidson was added to the long term injury list, the club promoted Maxwell to the senior list. His debut came soon after in Round 9 against Adelaide and proved enough, playing 10 games in his first season as a hard-running defender. His size however was still tall and very lean. His promotion was then lifted as he was elevated onto the senior list for the next season.

In 2005, Nick Maxwell had a breakthrough once again. His presence was more physical . After spending two weeks in the grandstands he received the call up to replace the out of form Ryan Lonie in round three, and did not miss another match. He kicked six goals for the season, at times when they were needed late in a quarter to help momentum. At 22 he was regarded by many as a player possessing outstanding maturity and dedication onfield.

Nick Maxwell had a solid start to the season in 2006. In Round 10 he put his body on the line in a contest where he dived in to receive a hard ball get, getting crunched by Jonathan Brown of the Brisbane Lions, and he broke his leg. He missed the next 6 weeks with the broken leg, but would come back to the side and play every game for the rest of the year, showing his reasons of cementing a spot in the soon to be successful side.

In 2007, he became AFL Players Association representative for Collingwood. He played all 25 games, including three finals and was a regular contributor to the side. Coach Mick Malthouse used Maxwell as a utility, with an ability to play both ends of the ground and kicking eight goals. His total of 98 tackles, third highest at Collingwood. An example was his vigorous tackle in the Preliminary Final against Geelong’s Max Rooke. Maxwell’s leadership at Collingwood was shown throughout the season. He captained the club for the first time in Round 16 against Essendon in a 29-point win.

In the 2008 pre-season, Nick Maxwell was handed the number five guernsey, worn by retired club captain and icon Nathan Buckley. He also became the vice-captain of the side and was one of the favourites to beat Scott Burns for the captaincy role left vacant by Buckley, but Burns was given the top job.

On 17 December 2008 Collingwood Football Club announced the appointment of Maxwell as the club captain.

In the 2009 NAB Cup, Nick Maxwell was controversially cited by the AFL tribunal for a shirtfront on West Coast’s Patrick McGinnity which broke McGinnity’s jaw. The incident caused significant controversy. Collingwood launched a successful appeal, the only one in the history of the recently introduced incarnation of the AFL tribunal and the decision was overturned.

He was suspended in Round 3 of the AFL season for an incident involving Steve Johnson of the Geelong Cats, causing some media commentators to cast doubts on his choice as club captain.

Nick Maxwell was selected in the 2009 All-Australian side on the half back flank.

On 2 October 2010, Maxwell captained Collingwood to its first AFL premiership in 20 years; the first since the 1990 premiership victory. The win came about in semi-controversial style, with the first Grand Final ending in a draw one week earlier. Maxwell declared the situation an “absolute joke” in an interview with Matthew Richardson immediately post-game. Collingwood won the replay 16.12(108) to St Kilda 7.10(52), giving his side their 15th Premiership.

Nick Maxwell announced his retirement at a press conference at Westpac Centre on 16 July 2014 following results of a long term ankle injury suffered the week before in the Round 17, 2014 clash with Essendon.