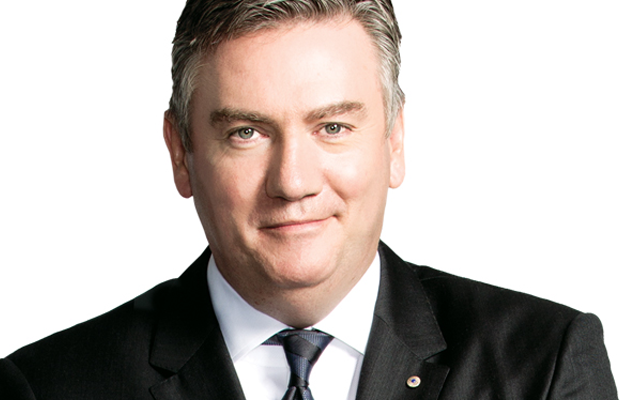 Eddie McGuire grew up in the working class Melbourne suburb of Broadmeadows he and older brother Frank McGuire both won scholarships to Christian Brothers’ College, St Kilda. Frank McGuire, who worked as a newspaper sports reporter, helped McGuire to get his first job in the media as an Australian Rules Football statistician and cricket reporter for The Herald (1978–1982). Later he became a cadet sports reporter for Network Ten and then transferred, in 1993, to the Nine Network where he became the host of a sports variety program,

McGuire’s role at Nine expanded when he became the host of The Footy Show in 1994. He remained on the show until 2005.

In April 1999, he began hosting the Australian edition of Who Wants to Be a Millionaire, a successful Australian franchise of the globally exported television game show. He hosted the program from its première on 18 April 1999 until 3 April 2006. He briefly returned to the show after an 18-month hiatus in 2007.

Eddie McGuire hosted the annual Australian Logie Awards show in 2003 and 2004 and co-hosted in 2005.

Eddie McGuire was a football radio caller at Triple M, a station which had previously concentrated on rock music. He also wrote a football review for The Herald‘s successor The Herald Sun, as well as becoming involved in a variety of sports and media-related business ventures.

Eddie McGuire was a prominent campaigner for Australian republicanism (the movement for replacement of the British monarch as Australia’s head of state). He was elected as a delegate to represent Victoria at the 1998 Constitutional Convention, which led to the ultimately unsuccessful 1999 referendum.

On 29 October 1998, McGuire was elected by the vote of the members as president of Collingwood Football Club, an Australian Rules Football club which was then in financial and on-field difficulties. Results were quick to follow, with Collingwood playing in back-to-back grand-finals (2002–03) within three years of his appointment.

2010 brought “tears of joy” for Eddie McGuire when Collingwood defeated St Kilda in the AFL Grand Final replay. The first match resulted in a draw, prompting McGuire to say before the replay that “he had seen more drawn Collingwood Grand Finals (1977 and 2010) than he had seen premierships”.

Despite Tim Lane’s resignation, Friday Night Football proved a huge success for Channel Nine, in no small part due to the presence of, in his own words, “the biggest name on the Nine Network”, McGuire himself. McGuire also claimed that a decline in ratings for Friday night telecasts in 2006 was partly because “I didn’t do football this year.”

CEO of the Nine Network

On 9 February 2006 it was announced that Eddie McGuire would become the new CEO of the Nine Network, filling a vacancy created by the departure of David Gyngell in May 2005. McGuire had to sacrifice his on-air commitments including hosting The AFL Footy Show and Who Wants to Be a Millionaire?, as well as AFL commentary, for what turned out to be a very short term tenure.

According to Business Review Weekly McGuire’s on-air salary was $3.5 million a year. Gyngell had earned $1.1 million a year by comparison. According to the 2006 PBL annual report, McGuire was reported to be on a $4 million fixed remuneration contract.

In May 2006, McGuire travelled to Beaconsfield, Tasmania to rally Nine News reporters covering the mine collapse. McGuire came out of on-air retirement to host the event, which was broadcast as part of The AFL Footy Show (both versions).

Before leaving for the Munich edition of The Footy Show he announced the elimination of 100 jobs, most in news and current affairs. Despite a vigorous publicity campaign by the CEO these cost-cutting measures severely damaged morale at the network. On one program McGuire’s required job-cuts exceeded the actual number of employees. This raised questions in both the media and within Channel 9 itself about the competence of Nine’s executives.

The troubles worsened when an affidavit written by a Channel 9 executive affected by the purges was leaked to the press and Nine failed in its attempts to suppress it. It contained allegations regarding McGuire’s treatment of employees. The document’s author, Mark Llewellyn (previous head of news and current affairs who has since found work at Channel 7), claimed that McGuire and his staff had told him that he would be forced to “eat a shit sandwich” (accept a dramatic pay-cut). He also recalled conversations with McGuire where the CEO had spoken of wanting to “bone” (fire) Jessica Rowe, co-host of the network’s Today show. Following these allegations McGuire guaranteed Rowe her position on the program. McGuire has never denied the allegations. On 6 May 2007, Llewellyn’s position was vindicated when it was announced that Jessica Rowe would not be returning to Channel 9.

McGuire’s decision to force Jana Wendt off the Sunday program backfired with the relaunch of the show on 3 September 2006. The Nine Network’s switchboard was flooded with an unprecedented number of calls complaining about the new format and hosts.

This episode was considered by many in the media as a failure by the ‘P-plated CEO’ (a term coined by Sydney tabloids) to manage the network in a professional and ethical manner. It also fuelled speculation as to his longevity in his position as CEO of Nine.

On 18 May 2007, Eddie McGuire announced he would be resigning as CEO of the Nine network and would be taking on a new position in programming services as well as more on-screen roles. He officially resigned as CEO on 30 June 2007.

In January 2007, McGuire returned to the TV screen, hosting the Australian version of the quiz show, 1 vs. 100.

In February 2009, Eddie McGuire hosted a telethon for the victims of the Victorian bushfires. He also hosted a telethon from Brisbane on 9 January 2011 for the 2010–2011 Queensland flood victims alongside Leila McKinnon and Karl Stefanovic at the Suncorp Piazza.

In early 2011, Eddie McGuire hosted another prime time quiz show, The Million Dollar Drop, lasting only for six episodes. He then became the host of the sports-themed quiz show, Between the Lines. His return was short lived when the show quickly failed in the ratings, being axed by Channel 9 after only three episodes had been to air. The fourth and final episode was broadcast on 2 June 2011.

During 2011 he hosted This is Your Life however the show did not return in 2012.

Eddie McGuire joined Fox Footy in 2012 in an AFL commentary and program panelist role, while still remaining at the Nine Network to host Millionaire Hot Seat and the station’s Olympic coverage.

During the 2012 London Olympics, McGuire presented his Triple M radio program from London each weekday. In addition, he called events for the Nine Network and Foxtel and co-hosted the opening and closing ceremonies with Leila McKinnon.

Eddie McGuire and McKinnon’s commentary of the Olympic opening ceremony was widely criticised in newspapers and on Twitter. Errors including spoilers before surprise appearances, ill-timed remarks, reference to the Peter Pan character Captain Hook as Captain Cook and Abraham Lincoln as a prime minister of the United Kingdom. The McGuire and McKinnon commentary was not used for Foxtel’s coverage of the opening ceremony.