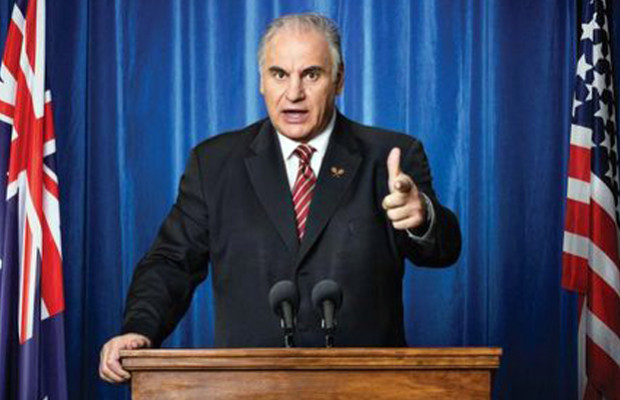 Sam Kekovich started his senior football career with Victorian Football League (VFL) club North Melbourne (Kangaroos) in 1968. The following year he won the club’s best and fairest award and was the top goal kicker with 56 goals. He played a key role in the club’s first premiership win in 1975 by assisting ruckman Mick Nolan by contesting boundary throw-ins, in which he won most of the hit outs against Hawthorn’s top ruckman Don Scott.

After playing 124 VFL games for the Kangaroos, between 1968 and 1976, Sam Kekovich moved to Collingwood in 1977, but only played four games, retiring from the VFL that season. His football career did not end, as he switched to play in the Victorian Football Association for the Prahran Football Club; he played 26 games for the Two Blues and played in the 1978 VFA Premiership side against Preston at the Junction Oval.

In 1987, Sam Kekovich signed to coach VFA club Camberwell, which had just been relegated to Division 2 following a winless 1986 season. Kekovich coached the Cobras for three seasons and he left the club after its winless 1989 season.

Sam Kekovich was included in the North Melbourne Team of the Century, on the interchange bench.

Sam Kekovich has carried on his flamboyant style into the media sector, being most notable for his ‘rants’ on the ABC show The Fat, a breakfast show on Melbourneradio station 3AK, as a radio presenter on Melbourne Sports Radio Station SEN 1116, in pre-match AFL coverage on Triple M, and on PTI Australia on ESPN.

Kekovich’s direct-to-camera TV monologues are done deadpan and use wide-ranging cultural references. Created by the writers of The Fat, the monologues were first piloted with AFL player John Platten and boxer Spike Cheney before the ABC asked Kekovich to perform. The ‘rants’ normally place in contrast many disparate or incongruous verbal images and ideas, ending with the trademark, “You know it makes sense. I’m Sam Kekovich.” The ABC released a spoken word album, You Know it Makes Sense, which was nominated in the ‘Best Comedy’ category of the ARIA Music Awards of 2002. Kekovich has performed these ‘rants’ in commercials for North Melbourne Football Club membership drives and Dan Murphy’s bottle shops.

From 2005 to 2014, Sam Kekovich headed a well-known annual advertising campaign for Meat and Livestock Australia in the lead-up to Australia Dayencouraging people to eat more Australian lamb. The advertisements were delivered in the style of Kekovich’s deadpan rants, and often made satirically outlandish statements un-Australianism. The first such advertisement drew particular controversy, when he labeled vegetarians as being un-Australian for not eating lamb on Australia Day, provoking outrage from animal rights activists and groups such as the Australian Vegetarian Society; but the Australian Advertising Standards Bureau allowed the ads to remain on the air, ruling them to be satirical, despite viewers’ complaints. Many of the subsequent ads have also drawn complaints from viewers, but all have been dismissed by the Bureau. In the Australia Day commercial promoting lamb for the BBQ, which featured Richie Benaud, Kekovich made an appearance along with “Captain Cook”, “Ned Kelly”, “Burke and Wills”, and Ita Buttrose.

Sam Kekovich was an executive producer on the Australian film Blinder released in 2013. Shot around Torquay, Victoria, the film is about a legendary former local footballer, Tom Dunn of the Torquay Tigers.