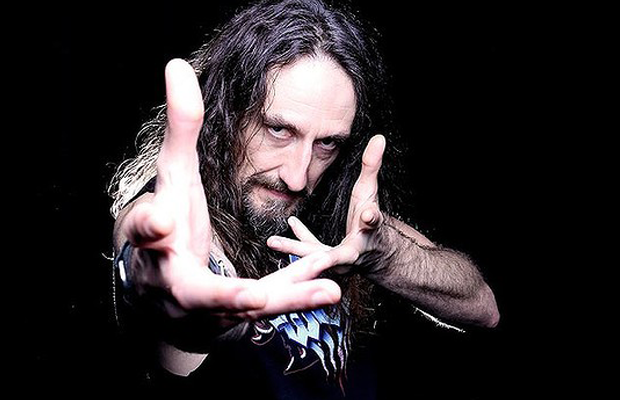 Born in Sydney, Australia, Steve Hughes became interested in heavy metal in the early 80s.[3] In an interview with MusicRadar Steve Hughes said he became obsessed with Iron Maiden in 1982 and “the pounding drumming of Mr Clive Burr” and was also heavily influenced by Black Sabbath and Dio drummer Vinnie Appice, particularly his work on Dio’s first 2 albums, which he would repeatedly play while attempting to play along.

In 1985 he founded a band that was originally named Onslaught, but the band was forced to change their name due to a UK-based band by the same name. The band briefly changed their name to Devastator, before settling on Slaughter Lord. Slaughter Lord released one demo tape titled Taste of Blood before disbanding in 1987. In spite of the band’s short lifespan, Slaughter Lord had received attention overseas[6] and has since been called “legendary” and “pioneering” in terms of Australia’s extreme metal history.

In 1989 Steve Hughes joined Mortal Sin While he did not appear on any of the band’s albums, he played drums for them during their European/American tour in 1990. After his work with Mortal Sin, Hughes formed a rock band called Presto, releasing 2 CDs. In 1993 he joined of the black metal band Nazxul. He also played live with the band Primordial while living in Ireland in 1999.

In 2010 Steve Hughes released the album Sumaire independently under the band name Eternum. Sumaire contained songs that he had written and arranged and mainly performed himself along with “some shredding solos performed by a variety of metal maniacs.

While Hughes has focused on his comedic career since the early 2000s, he said in a 2010 interview with Post Modern Ink magazine that music remained his first love.

Steve Hughes first tried stand-up comedy in 1994, shortly after having joined the band Nazxul, and started performing at The Comedy Store in Sydney.

Hughes quit Nazxul and left Australia for Ireland in 1999, living for a time with members of the band Primordial, then moved on to London, then on to Manchester where he stayed in a house with fellow Aussie comic Jim Jefferies before finally settling in Manchester in 2002.

Hughes’ early comedy was influenced by Bill Cosby and the works of Woody Allen, particularly his books Side Effects and Without Feathers as well as a 1965 recording of one of Allen’s stand-up shows that Hughes had owned on audio cassette. Hughes has also cited having been influenced by the comedy of Richard Pryor, Dave Allen, George Carlin and Eddie Murphy. Hughes comedic style has also been influenced by the political and subversive humour of Bill Hicks, as well as the spoken word performances of musicians Henry Rollins and Jello Biafra.

Hughes is known for maintaining his heavy metal look during his stand-up performances. Hughes has worn his hair long for much of his comedy career and also sports a goatee. He often wears all-black, including a leather jacket, concert t-shirt and jeans.

Steve Hughes comedy sets often contain social commentary including criticisms of political correctness, religion, war, drug laws, health and safety policies, colonialism, corporate capitalism, and technology. Hughes’ humour also touches upon topics of a spiritual and philosophical nature. He is also known for discussing ideas in the conspiracy theory realm, although he refers to himself as a “conspiracy realist” and adopted this title for one of his comedy tours in 2011.

Hughes’ stand-up has been featured on television shows such as the BBC series Michael McIntyre’s Comedy Roadshow in 2009 and Live at the Apollo in 2011. He also appeared on The Comedy Channel’s Cracker Night in 2010 and in 2011 he appeared on the Channel 4 series Stand Up for the Week.

After touring non-stop for four years and averaging more than 150 shows a year, Hughes took a break due to health-related reasons. During this hiatus he quit both drugs and alcohol cold turkey and cut his long hair short. He returned to the comedy stage in 2014.

In the 1990s Steve Hughes was a hard rock VJ for MTV Australia By Hughes’ own account, he got the job at MTV through the help of a friend who was a cameraman, but the job lasted only about 6 weeks after it was determined that there was not enough of a demand in Australia at the time for heavy metal-based programming.

Steve Hughes was interviewed for the 2014 documentary film Metal Down Under: A History Of Australian Heavy Metal.

In 2009 he appeared as a guest panelist on the Australian game show Good News Week.Hughes also played drums during the episode while host Paul McDermott sang the song “Hanging on the Telephone”. He also appeared on the Australian music-themed quiz show Spicks and Specks in 2010.

In 2015 Steve Hughes starred in the Australian short film Brainless Killers as the mayor of Zombridge, a fictional town inhabited by zombies. The role required extensive make-up, provided by the same make-up team that worked on Mad Max Fury Road. The film was nominated for 6 awards in the short film category and went on to win the awards for Best Film, Best Special Effects and Best Thriller.