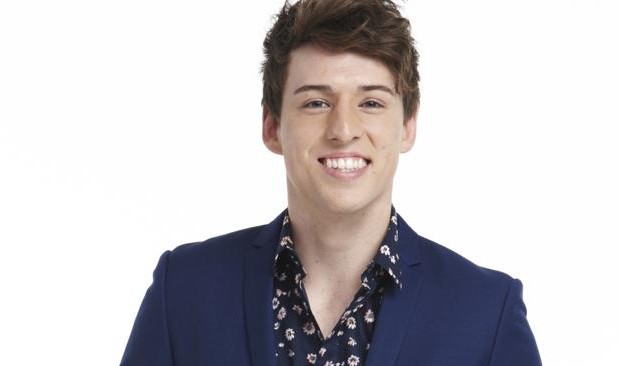 Taylor Henderson is the runner up and one of Australia’s favourite contestants on this years X Factor.

Taylor Henderson is a 20 year-old contestant from Ceres, Victoria who sang “Some Nights” by Fun at his audition. Henderson stated that his family inspired him to audition for The X Factor. Taylor Henderson plays guitar and writes his own songs. He cites Matt Corby, Michael Jackson, John Mayer, James Morrison, Jason Mraz, Ed Sheeran and Justin Timberlake as his musical influences. Henderson was born with Marcus Gunn Jaw-winking Syndrome. He lives with his father Cameron and his two sisters Bridey and Gemma on a farm.

Taylor Henderson and Cameron were finalists in the fourth series of Australia’s Got Talent; Henderson finished in third place and Cameron was runner-up. Prior to entering The X Factor, he worked as a labourer.

On the first day of bootcamp, Henderson was placed in the Boys category and sang “Ho Hey” by The Lumineers in front of his entire category and judges Redfoo, Ronan Keating and Dannii Minogue. On the second day of super bootcamp, he was put into an ensemble of 10 and they sang “Last Request” by Paolo Nutini in front of the judges. Henderson made it to the third day of bootcamp, where he sang “Human Nature” by Michael Jackson to the judges and a live audience of one thousand. He then progressed to the home visits round in Los Angeles and sang “Isn’t She Lovely?” by Stevie Wonder in front of his mentor Keating and guest mentor Kelly Osbourne. Keating later selected Henderson, along with Omar Dean and Jai Waetford, for the live finals—a series of ten weekly live shows in which contestants are progressively eliminated by public vote.

For the Judges’ Choice-themed first live show, Henderson sang “I Won’t Let You Go” by James Morrison. Redfoo said that Henderson is one of his favourite acts in the competition, while Keating noted that it was not his best performance of the song. Henderson’s performance of “I Won’t Let You Go” debuted at number 84 on the ARIA Singles Chart. For the Legends-themed second live show, he sang “Run to You” by Bryan Adams and played the electric guitar for the first time. Minogue thought the guitar playing was a bit absent at times and that Henderson’s song choice did not work for him. For the Top 10 Hits-themed third live show, he sang “I Will Wait” by Mumford & Sons and received a positive feedback from the judges. Natalie Bassingthwaighte called Henderson’s performance “insane” and thought the song choice was perfect for him. His performance of “I Will Wait” debuted at number 64 on the ARIA Singles Chart.Henderson received a standing ovation from the judges for his performance of Passenger’s “Let Her Go” in the Latest and Greatest-themed fourth live show, and it debuted at number 85 on the ARIA Singles Chart.

For the Power and Passion-themed ninth live show, he sang “Against All Odds” by Phil Collins and “Girls Just Want to Have Fun” by Cyndi Lauper. During the ninth results show, Henderson fell into the bottom two for the first time with Third Degree. After the judges’ vote went to deadlock, it was announced that Henderson received the most public votes and was put through to the grand final. His performances of “Girls Just Want to Have Fun” and “Against All Odds” debuted on the ARIA Singles Chart at numbers two and 90 respectively. During the first show of the grand final on 27 October, Henderson was required to perform three songs – his audition song, winner’s single and last shot song.

Henderson’s winner’s single was “Borrow My Heart” and his last shot song was “The Blower’s Daughter” by Damien Rice.

In November 2013, Henderson will embark on The X Factor Live Tour across Australia with Third Degree, Dami Im, Jiordan Tolli and Jai Waetford.